Co2 Fire Extinguishers, The carbon dioxide fire extinguisher is a staple in our portable extinguisher line up at ABCO Fire & Safety Inc. Carbon dioxide, also known as CO2 is a natural, colorless, odorless gas. Along with the fact that carbon dioxide (CO2) is a vital part of life on earth, it is also an effective fire-extinguishing agent.

CO2 is effective as an extinguishing agent because it lowers the oxygen level to such an extent that combustion is no longer possible. CO2 acts inertly to lower the oxygen in the space it occupies, and oxygen is required for combustion to occur. Once a fire is successfully extinguished using carbon dioxide, you should continue the discharge onto the burn surface as CO2 has a cooling effect and its continued use will help prevent a from reignite

Because CO2 gas is so ‘light,’ the range of the CO2 discharge is restricted by air currents and easily dissipated. It should be used at a safe but close distance.

The overhead method is a technique that is unique to the carbon dioxide fire extinguisher. The overhead approach involves discharging the CO2 above the fire with the discharge horn aimed at a 45-degree angle toward the center. This causes the carbon dioxide discharge to concentrate centermost and plume out towards the outer edges. When using CO2 extinguishers on flammable liquid spill fires, the base method should be used.

Carbon dioxide works by being kept under high pressures (in excess of 850 psi). When carbon dioxide is under such immense pressure, it liquefies making it self-expelling as it is under its own pressure. When a CO2 extinguisher is discharged, the carbon dioxide rapidly changes from a liquid back into its gaseous form expanding and directed through the discharge horn of the extinguisher. This process allows for the fire and the surrounding space to be permeated with carbon dioxide.

ABCO Fire & Safety Inc services and recharges all types of carbon dioxide containers, including fire extinguishers, recreational CO2 products such as paintball guns, beverage-dispensing cylinders, and any other product that uses CO2 cartridges. We can also do hydrostatic testing of your CO2 equipment, and our mobile units can come to your location.

At ABCO Fire & Safety Inc, our only business is the protection of your business, home or boat from fire. It’s what we’ve been doing since 1997, and it’s what we’ll be doing in 2039. We offer a quality service at a fair price, and we are proud to stand behind what we sell and service. 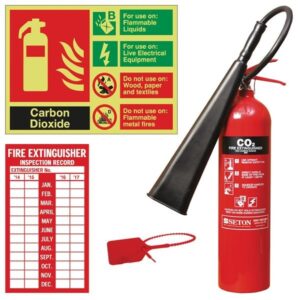 If you are anywhere in the Tampa, St. Petersburg, Clearwater, Lakeland, Largo, Sarasota, or Bradenton areas, we are just a phone call or email away. Call us at 727-692-3970, or email us at info@abcofireandsafety.com. If you prefer, fill out our easy Contact Us form, and we’ll reach out to you.